What would Dr Montessori say about technology in the classroom?

Montessori education can have a bit of a reputation for valuing and upholding some ‘old-fashioned’ ways of doing things such as cloth washing with a corrugated washboard and favouring chalkboards over whiteboards. So, what would Dr. Montessori say about technology in the classroom? If whiteboards aren’t really featured in a Montessori classroom, how would iPads or tablets fair in her eyes?

Some puritanical Montessorians might be inclined to think that the materials and activities that Dr. Montessori designed, tried and true, is the way to stay and move forward with. But considering that Dr. Montessori was ahead of her time, innovated and revolutionised a new way of teaching children and was initially interested in going to technical school for her own education, I would like to think that she would be quite open to what our modern technology has to offer children today.

These days, technology is everywhere. Children see phones, laptops, smart TVs, robot vacuum cleaners… They have most likely given commands to Alexa and Google to perform tasks around the house. They have been deemed ‘Digital Natives’- the generation that does not know life without the internet or technology. This is their world, their culture, and Montessori says that it is our role as adults to integrate them to their time and place. So, as educators, carers and parents, we need to take constructive steps, with their developmental needs in mind, to integrate our children into this techno-saturated world with consciousness and purpose.

There is constant debate over what age is appropriate for children to use phones and computers at home and in the classroom. How much screen time is acceptable and is it damaging to the child’s development? I suppose these questions can be asked in parallel to other potentially dangerous tools such as knives and hammers- yes, they can be harmful if used incorrectly, but if the child can learn and benefit from these tools, then they should be taught how.

Children of the 3-6 environment will be satisfied with the names of the technological devises we use as adults and have some interaction with them. However, developmentally, they don’t NEED to use these devises as tools. They are at a stage where they are still exploring the material, physical world with their senses and moving towards the abstract, mainly asking the question of ‘what?’ So, I believe Dr. Montessori would say that the 3-6 child knowing names, names of the parts and general uses will suffice.

When children reach the age of 6, Dr. Montessori says there is a shift in the child’s intellectual sensitivities. They enter the Second Plane of development and want to know ‘why?’ and ‘how?’ and crave to investigate the cause and purpose. The Second Plane child develops a stronger curiosity about how the world works and are often seen dissecting and dismantling things to investigate what happens beyond what the eye can see. Dr. Montessori believed that while the child is in this stage of intellectual sensitivity, they should be shown ‘the interrelatedness of the Universe’. In a world where technology is present for our convenience and enhancement, it would be very natural for the Second Plane child to be curious about their surrounding machines, robots and appliances and what makes them tick.

Gil, the resident technology teacher at North-Eastern Montessori School, is a natural Montessori teacher…and doesn’t even know it! He connects with the Second Plane child’s curiosity and desire to learn how to build things. Dr. Montessori said, ‘when details are presented as being parts of a whole, they become interesting.’ In Gil’s workshops, Second Plane children have opportunities to learn

about the details of their technological reality in the context of robotics and coding. He embraces mistakes and risks as critical windows to learning, to which Dr. Montessori would say that his classes facilitate ‘friendliness with error’. In the interview for this article, Gil describes working with technology as a ‘decathlon of the mind’ which is well-suited for children in the Second Plane as they enter an intellectual phase where they are drawn to create a new reality where imagination, work and exactness are needed to do so. Montessori said: ‘When a child’s interest is aroused on the basis of reality, the desire to know more on the subject is born at the same time’. So, the 6-12 child who has the intellectual ability to use a tablet and search engine to research their topic of interest, they would use ‘screen time’ productively as a tool (rather than a crutch for boredom). Gil recalls a spontaneous moment with a child who excitedly asked him in passing if they could build a car in class- this simple request provided Gil with content of interest into which he and the child would delve for precise information needed to create the car which would satisfy the child’s inner need for exactness.

Montessori said: ‘if we study the works of all who have left their marks on the world in the form of inventions useful to mankind, we see that the starting point was always something orderly and exact in their minds, and that this was what enabled them to create something new.’ And technology classes for the 6-12 year old child have the potential for exactly that. Who knows what simple tinkerings and codes the children explore today for possible great inventions of tomorrow?

“If we study the works of all who have left their marks on the world in the form of inventions useful to mankind, we see that the starting point was always something orderly and exact in their minds, and that this was what enabled them to create something new.”
Dr Maria Montessori 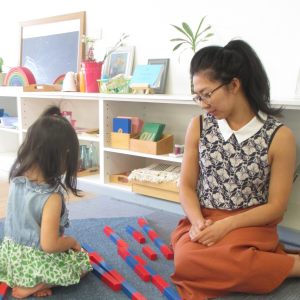 Taia believes she was a Montessori teacher before she became a Montessori teacher. The universal needs of humans and the spontaneous spirit of the child has always intrigued her. Taia's collective experience in study, international travel, work across different fields and hobbies of various creative disciplines has enabled her to be a well-rounded person who can offer a worldly classroom to the bright-eyed child.